What is a shear stud for?

The increased performance of composite beams, in stiffness and bending resistance, allows the construction of longer spans and shallower floors when compared to non-composite methods. This could allow smaller storey heights, more floors for the same building height, more flexible column free areas and increased opportunities for services.

What is a shear stud for?

Steel designers design the steel frame to approved design standards (the latest being Eurocode 4).  These design standards have formulae to calculate the amount of force that can be transferred by each shear stud.  When designing the composite beams, the steel designer will calculate how many studs are needed for the beam design based on these values.

The values used by the steel designer for shear stud strength rely on a concrete ‘cone of failure’ around the stud (see photo below) and the studs being spaced to the design rules stated. 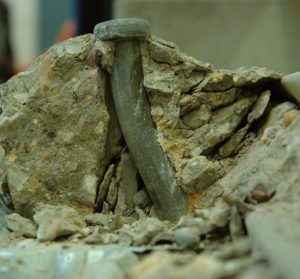 There are a number of rules and recommendations from approved design standards and industry best practice which specify spacings, dimensions and layout of studs in order to achieve the required stud resistance. Below is a selection of the most common examples.

When installing shear studs, the length after weld should extend at least 35mm above the top of the main rib of the deck profile. Therefore, the minimum length after weld (LAW) should be 95mm for the TR60+ or R51 and 115mm for TR80+.

The recommended minimum concrete cover to the top of the stud is 15mm, this should be increased to 20mm if the shear stud is to be protected against corrosion.

Minimum Flange Thickness to prevent localised bending of the flange at ultimate loading and minimise the chance of weld blow-through = 0.4 x diameter of shear stud = 7.6mm for a standard 19mm stud. 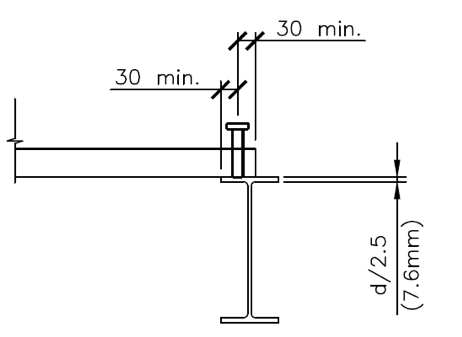 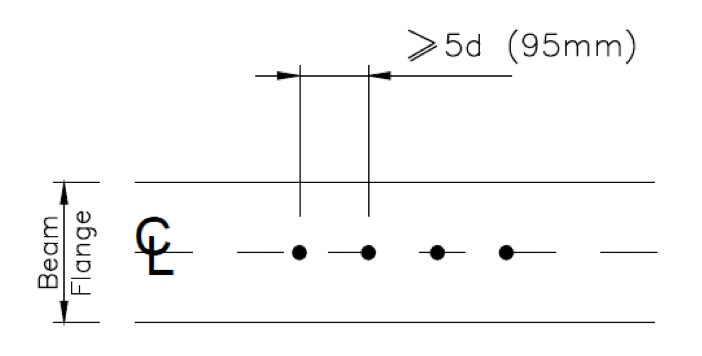 Single studs can be located on CL beam except at butt joint where studs should be staggered in line with typical details – minimum spacing as indicated in BS5950-4 and Eurocode 4. 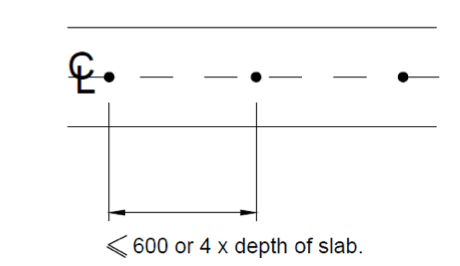 Single studs in a staggered pattern – to be utilised at all butt joints.

Methods for determining the resistance of shear studs in solid concrete are outlined in BS EN 1994-1-1 and BS5950-3 Section 3.1:1990 +A1 2010. When used in composite decked slabs, these solid slab stud resistances may need to be reduced due to the decking geometry and/or orientation.

The table below indicates the stud reduction factors for SMD profiles calculated in accordance with latest SCI Publication P405 and NCCI document PN001a-GB: Resistance of headed stud shear connectors in transverse sheeting. kmod (modification factor from Table 2.1 of PN001a) is already applied to TR+ values where appropriate. The factors in this table should be applied to the minimum resistance for a stud in a solid slab from equations (6.18) and (6.19) of BS EN 1994-1-1.

From an installation perspective, a clear height of 450mm + stud length (before weld is required), normally a dimension of 570mm. Overhead obstructions can include steps in level, beams, overhanging slabs, cladding or services. 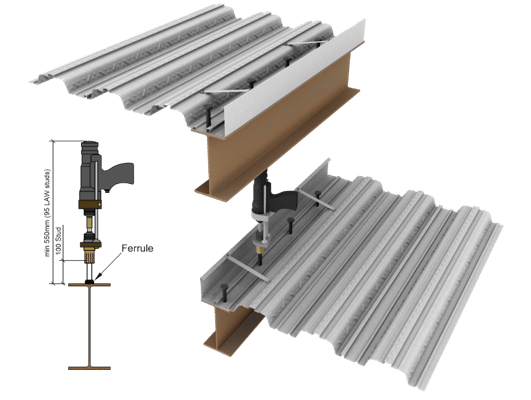 For all sections to receive welded studs, the top surface must be free of contaminants, paint and rust (refer to Data Sheet 212). Poor connection between studs and beam due to paint contaminants, mean that the weld cannot be concentrated into a localised area inside the ferrule resulting in an erratic weld patter and ultimately a failure of the stud. If the underside of the top flange is painted, then welding can cause blistering which will require remedial work for aesthetic reasons (or safety reasons if intumescent paint has been used). It is also important to note that galvanised sections cannot be welded to.

In summary: studs and spacings should be specified by the engineer and installed ensuring that these are adhered to.

to hear about our special offers and discounts!

This website uses cookies to improve your experience while you navigate through the website. Out of these, the cookies that are categorized as necessary are stored on your browser as they are essential for the working of basic functionalities of the website. We also use third-party cookies that help us analyze and understand how you use this website. These cookies will be stored in your browser only with your consent. You also have the option to opt-out of these cookies. But opting out of some of these cookies may affect your browsing experience.
Necessary Always Enabled
Necessary cookies are absolutely essential for the website to function properly. This category only includes cookies that ensures basic functionalities and security features of the website. These cookies do not store any personal information.
Non-necessary
Any cookies that may not be particularly necessary for the website to function and is used specifically to collect user personal data via analytics, ads, other embedded contents are termed as non-necessary cookies. It is mandatory to procure user consent prior to running these cookies on your website.
SAVE & ACCEPT